Note: This blog post is from 2013. Some content may be outdated--though not necessarily. Same with links and subsequent comments from myself or others. Corrections are welcome, in the comments. And I may revise the content as necessary.

If you're a user of Windows Remote Desktop and a fan of keyboard shortcuts (or someone looking to save time while working with a remote desktop session), you will want to consider this post.

Those who know the value of common Windows shortcuts, like alt+tab, ctrl+escape, alt+home, etc., will know those work against your local machine, unless you open a maximized remote desktop in which case they then work against the remote machine. And that's great, of course.

But what if you have a remote desktop opened as a window (one of many apps visible on your local desktop)? You may find it frustrating, if you mean to be doing the equivalent of an alt+tab WITHIN the remote desktop, while viewing it as a windowed app. The keys will again work against your local machine, like with any app.

Is there a way to do such common keyboard shortcut actions against the "windowed" remote desktop? Yes there is. I find that relatively few people know about these, and most are delighted to learn of them! :-)

See below for more discussion on these, but briefly...

Note first that you can use ctrl+alt+break to toggle a Remote Desktop between full-screen and windowed mode. That helps make these shortcuts all the more valuable, once you are viewing the "windowed" remote desktop, where you can use:

Again, these shortcuts are for using when you are in a *windowed* remote desktop. Beware also that if any don't seem to "work" for you:

For still more detail and discussion on these keyboard shortcuts, read on.

CF911: Tips for dealing with Windows service timeout, useful when CF's taking too long to stop/start

In this second entry, I'll address the separate but related problem, particularly if you're running CF as a Windows service, that you may find you get timeout errors from the Windows Services panel itself. I'll share some tips to help with that, which I share often with clients of my independent consulting as a CF troubleshooter.

The first thing to understand is that there is indeed a timeout (configurable) for how long the Windows Services control panel is willing to wait. Beyond that, though, there are some 3 more tricks you can use to avoid that timeout. (And I would say again that sometimes you really want to focus instead on WHY CF is taking so long to startup or shutdown, but until you do, the following info may help give you some breathing room.)

Do you find yourself working at the Windows (DOS) command prompt window (aka Start>Run>cmd), and after having entered many commands, wish you could save them to a file, such as before closing the window or perhaps when needing to restart?

This is a bit of esoterica, but as I've seen some searching for a solution in various help forums, I figured I'd share it here. It can be especially useful if you've been using the Microsoft LogParser command-line tool, which allows you to use SQL statements from the command line to analyze log files of all sorts. You may build up a large set of them during a session, and wish you could save them off before closing the command prompt window.

(Update) And in PowerShell, use:

Have you sought a keyboard shortcut to "open table" in SQL Server Management Studio?

Note: This blog post is from 2007. Some content may be outdated--though not necessarily. Same with links and subsequent comments from myself or others. Corrections are welcome, in the comments. And I may revise the content as necessary.

I'm a huge fan of keyboard shortcuts, so imagine my dismay when I noticed that the new SQL Server 2005 "open table" option, available in Management Studio when you're viewing the tables in a database, had no keyboard shortcut (or Admin menu equivalent). The feature opens an editable grid of data in the table, which is a great when you need to do a quick fix of the data. But you have to right-click to see the option--I wonder how many never even notice it?

So I asked around and got an answer to my keyboard dilemma which actually is a generic windows solution. Did you know that you can get the equivalent of the right-click by using Shift-f10? Whatever you have the keyboard focus on, it will open its corresponding context menu. Very nice.

So in SQL Mgt Studio, open the database, then its tables, then select the table (all of which can be done with the keyboard), and then use shift-F10. You'll suddenly see that each context menu option shows the standard underline under the key to hit to execute that command (it's the "o" for open table).

Hope that may help others.

Switching among source windows in Eclipse/CFEclipse

Note: This blog post is from 2006. Some content may be outdated--though not necessarily. Same with links and subsequent comments from myself or others. Corrections are welcome, in the comments. And I may revise the content as necessary.

Those who know me well know I'm a big fan of keyboard shortcuts. I could give a whole session on them (and perhaps someday will), so I want to share one that I learned and which is useful if using Eclipse, CFEclipse, or FusionDebug. While many know ctrl-tab will swap among windows in many programs, that doesn't work in Eclipse. Try ctrl-F6 instead, which will show a drop down list of open files and let you scroll forward through them. To go backwards in the list, use Shift-ctrl-f6. Cheers. 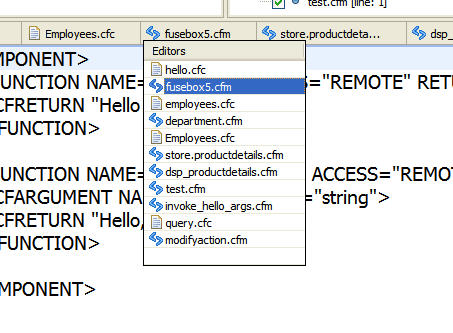 PS For other keyboard shortcuts I've shared, going beyond things related to CF, check out the category/tag on the topic at my other (older) blog, tipicalcharlie.com: http://www.tipicalcharlie.com/tags/?/keyboard%2Bshortcuts (domain gone, page recovered from Archive.org)

PPS The entry above on ctrl-f6 is just one more point to be made about looking at Eclipse as a whole when using either CFE or FD. Don't just focus on what those plug-ins add, but rather also on the built-in features of the Eclipse interface which may help you with day-to-day functionality.

Update: Since writing this in 2006, note the several comments below where people offered still more. And of course since then CFBuilder has come out, and with its built-in Aptana offers still more of them. Indeed, in a talk I did on hidden gems, I list other shortcuts for switching windows.