Stuck running the ColdFusion 'Migration wizard'? Here's how to get past that

Note: This blog post is from 2016. Some content may be outdated--though not necessarily. Same with links and subsequent comments from myself or others. Corrections are welcome, in the comments. And I may revise the content as necessary. 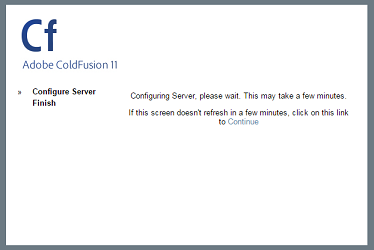 Someone presented a problem on a discussion list where they found that upon installing CF, they got to the "migration wizard" screen, and though it offered the option to "continue" if it hung up, it did not continue for him.

In this post, I'll share how to get past that prompt, if this happens to you. (And despite that image on the right showing ColdFusion 11, this could conceivably happen in CF10, CF9, and so on, and this same solution applies to all.)

For the anxious folks who want to "skip the waffle" and context/setup, the solution is at the very bottom. :-)

For those who may wonder first, "what's this migration wizard?", it's a mechanism that runs on the first execution of the CF Admin after installing CF. It's purpose is to look and see if there are any previous editions of CF on the machine, and if so, to offer you the option to read in the CF admin settings from that previous release.

(And as I'll talk about below, if you ever want to do that "after the fact", whether hours, days, or weeks after installing CF, you can do that, through a documented process I point out below.)

And to help folks find this post, if they're searching for a portion of the text in that screen, here's the text:

"Configuring Server, please wait. This may take a few minutes. If this screen doesn't refresh in a few minutes, click on this link to Continue."

Some preliminary points on the "hanging request"

As for the hanging request, I'd that first that this is not necessarily a problem indicating that CF itself is hung, since this page is presented once one logs into the Admin.

The fact that he got past that CF Admin login before hitting this page, I suspected that there was some other explanation for the problem. But we couldn't readily find that explanation (I was not on his server, as I do in my CF server troubleshooting consulting, I was just responding to him on the discussion list. If he had a tool like FusionReactor, he could certainly have found out exactly why the request was hanging up.)

Also, he had confirmed that in his case, this was an install on a new box, so this was not an issue of a problem of the migration wizard having a problem pulling in previous version settings.

That's when I proposed instead that he just configure things so that he wizard be skipped entirely (assuming that's what one wants to do), which is quite easy and what I want to share here. I'll also show along the way how you could try to re-run it later if you wanted to.

How this "wizard" can be controlled to run again

Again, the "wizard" is just a page in the Admin which presents itself right after you login (to the Admin) for the first time. Normally, once you run it, it never runs again.

What's not well-known is that there is in fact a documented means to get that Migration Wizard to run again, even "after installation", such as if one wanted to bring the CF admin settings from an earlier release (from another machine), and have them imported by this wizard. (This is a FAR better solution than folks just plunking the neo-*.xml files from one version of CF into a newer one. That's nearly always a bad idea, even if it may "work" for some.)

I've blogged about this before, also.

All you need to do, to solve this problem of getting stuck at the wizard, is to effectively "reverse" the process that documentation lays out. :-) That doc talks about modifying a key XML file to set some values to "true", in order to get it to re-run the wizard again on the next run of the CF Admin (after you've been past it previously).

But you can instead set it to DISABLE the running of the wizard, and you should then be able to proceed to the Admin without problem.

Setting the "wizard" to not run at all

The key then, to "skip" the wizard (if it's hanging for some reason) is for you to edit the file (assuming CF11 on Windows, for instance): C:\ColdFusion11\cfusion\lib\adminconfig.xml, and ensure that these XML values are all false.

On doing that, and saving the file, then the next time you run the CF Admin (no CF restart required), it will skip the migration wizard.

And if you want to try to run it again later, you could of course, by setting the appropriate vvalues to "true", as discussed in the docs above. And if it still doesn't work, use this process to skip it.

(Note as well that the ColdFusion Archive/CAR mechanism is another way you can import/export admin settings from one CF instance to another, and this is now something provided in ColdFusion 11 Standard, whereas it used to be only in ColdFusion Enterprise. More on that in another blog post I did, here.)

Comments (5)
Comments
[Add Comment]
Nice article Charlie. My only concern is, if you set the attributes to "false", then your migration of settings will not happen. I suggest, before turning them to "false", just ensure that the neo-*.xml within \ColdFusion11\cfusion\lib\ are updated.
# Posted By Anit Kumar Panda | 1/28/16 5:27 PM
Hi, Anit. Well, the premise of the post is that the wizard was not working (for the person who reported the problem. It was just hanging.) For him, showing how to "skip it" allowed him to proceed with access to his CF Admin, which was of primary importance.

And consider also that he'd mentioned that his machine did NOT have a prior installation of CF on it, so that was all the more reason why he didn't even need the migration wizard to run.

I did clarify both those points, but given your observation, I have tweaked the article in a few places to make it clear that of course one could use the same mechanism, setting those values to "true", to try to run the wizard again at a later time.

I also added mention of the CAR mechanism as another way to export/import admin settings, including the fact that CF 11 now offers that in Standard, pointing to a blog post I had done on that. (Before anyone would crow that that support in CF 11 won't help if the previous version, which one wants to export from, is NOT Enterprise, I do realize that and discuss it in that other blog post.)
# Posted By Charlie Arehart | 1/29/16 10:31 AM
Cheers Charlie.
# Posted By Anit Kumar Panda | 1/29/16 2:54 PM
Hi Charlie,
We are using CF now for more than 20 years and want to install a brand new test with CF 2021. The proces is a sham(e). I have to refer to your CF11 post!
# Posted By koen | 3/20/22 9:14 AM
Koen, FWIW I will note that I've not hit this in several hundred new installs since writing this 6 years ago. So let's not give the impression that everyone will, let alone thst cf is a "sham". It has its warts, which some may hit, as is true of most software.

Anyway, hope this helped you get past your encountering it. That's indeed why I wrote it.
# Posted By Charlie Arehart | 3/20/22 9:21 AM
[Add Comment]
Copyright ©2022 Charlie Arehart