As much as many have been referring to the new release (known for now as "Project Stratus") as "CF2020", it's looking like it may be instead "CF2021", if I'm reading the tea leaves right. And maybe it's only the name, not the actual release year. Let me explain (Hey, the bright side is that "2020" as a year is one many want to forget.)

A first clue was when an engineer wrote a blog post on the CF portal a couple of weeks ago, describing it as an "overview of the SAML feature available in ColdFusion 2021." That last reference caught the attention of some of us (as I commented there, wondering if it was a slip or a foreshadowing). 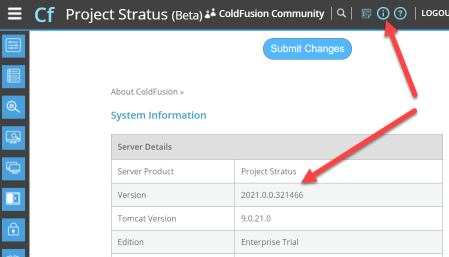 Beyond that, though, I think we may have pretty clear evidence/confirmation now, from the prerelease itself: I happened to notice for the first time today in working with the prerelease that the CF Admin page for "System info" reported the version as 2021.0.0.321466.

FWIW, this is from the download that's been on the prerelease site since August, not some new download. I just hadn't noticed and hadn't heard of anyone else noticing it yet.

On Adobe's referring to it as "Project Stratus"

Of course, Adobe has tended to refer to the prerelease either euphemistically as "CFNext", or more often by its code-name, "Project Stratus". That's not unusual, of course. They've always given code-names to new CF releases--as far back as at least CF6 ("Neo")--and then used that name during the prerelease timeframe, only using the formal name once it's officially released.

Should be well worth the wait

Whenever it comes out, I'm sure most would rather see it "come out only when it's ready".

And this next release is indeed quite a substantial one, as I hope to talk about in upcoming blog posts, or which you can find out about yourself at prerelease.adobe.com.

There is at least one negative ramification to this, though a rather minor one. There are various resources already written (blog posts, presentations, tweets, etc.) where folks (especially non-Adobe folks) have referred to this "next" release as CF2020.

Or are they just throwing us off the trail?

All that said, I'd love to find out that this is instead a bit of a shell game, "throwing us off the trail", to keep us guessing. :-)

Or again maybe it's another way to "put any references to 2020 in the rearview mirror". :-)

But I thought I'd share especially this screenshot since I'd not yet seen anyone else mention it.

Comments (7)
Related Blog Entries
Comments
[Add Comment]
Considering that CFNext or Project Stratus or CF2020 or CF2021 is such a HUGE change, I am not surprised or even disappointed that it's taking a little bit longer to get everything completed. I'd rather it get done right than rushed and buggy.
# Posted By Wil Genovese | 10/6/20 11:55 AM
Great to hear from you, Wil, and hope you're on a road to recovery.

And yep, on your observation there. Just to be clear, that's indeed why I had said, among the other things:

"I'm sure most would rather see it "come out only when it's ready". And this next release is indeed quite a substantial one, as I hope to talk about in upcoming blog posts, or which you can find out about yourself at prerelease.adobe.com."
# Posted By Charlie Arehart | 10/6/20 12:33 PM
To Wil's last comment, I went ahead and tweaked the post to put a new subhead in ("Should be well worth the wait"), just before the text I quoted. That should help it stand out more clearly.
# Posted By Charlie Arehart | 10/6/20 12:37 PM
Guess they also have to look at it from a marketing perspective - can't actually do any sort of conference / tour currently so why not wait another 3-6 months and keep fine tuning things.
# Posted By Jim Priest | 10/6/20 6:49 PM
Good possibility, Jim.
# Posted By Charlie Arehart | 10/6/20 7:29 PM
Heh, here's to wishful thinking. Perhaps that will give them time to also get a VSCode extension complete. ( more complete, out, something along those lines )
# Posted By John Farrar | 10/8/20 12:08 PM
That's another great point, John. Yes, I agree.

And for those who have not heard, Adobe has mentioned in recent presentations that they DO plan to rewrite CF Builder from Eclipse to VSCode. They admitted that it would not likely make it out with Project Stratus.

So yes, perhaps if things with Stratus are delayed beyond that timeline they had in mind for the VSCode-based builder when they said that, maybe they could come out at the same time. They also said they foresaw it coming out in stages, with more features to come later.

Finally, to head off the inevitable (off-topic) question: yes, they said that their PLAN is to create BOTH an extension (for people already using VSCode) AND a complete white-labelled version of VSCode (for those who do not)--just like they did with CFBuilder as built on Eclipse, which offered both ways of implementing it.

And I'm sure some will have more questions or want to make comments (for or against their plan), but this isn't the right place for that. (I don't mind that John brought it up, but I'm just saying I have shared here all I know.) It would be better to raise a question about this on the prerelease.adobe.com site (in the Project Stratus site for now, or later when perhaps they create a prerelease for the VSCode version of CFB.)

Or maybe someone will come out with a post on it before then (whether someone at Adobe, or someone else, or I). My point is that either of those would be the place to discuss this tool further, rather than this post.